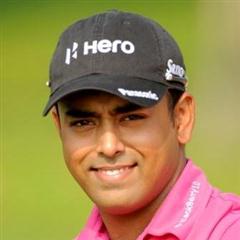 •    Anirban Lahiri claimed tied third at the Barbasol Championship, was fifth at the Valero Texas Open and tied sixth at the Corales Puntacana Resort & Club Championship during the 2021 PGA Tour season.

•    Anirban took the runners-up spot at the PGTI’s Jeev Milkha Singh Invitational 2020 Presented by TAKE Sports. He lost to Karandeep Kochhar on the third playoff hole.

•    Represented India (along with Gaganjeet Bhullar) at the World Cup of Golf 2018 in Melbourne. India notched a creditable tied 10th finish.

•    Anirban shot a PGA Tour career-best nine-under-61 at A Military Tribute at The Greenbrier 2018.

•    The 2018 PGA Tour season saw Lahiri post four top-10s to retain his card for the next season. He was tied fifth at The CJ Cup @ Nine Bridges, tied sixth at the WGC-Bridgestone Invitational, tied ninth at the Travelers Championship and tied 10th at CIMB Classic.

•    Anirban Lahiri made his second appearance at the Presidents Cup in 2017 in Jersey City, New Jersey, USA.

•    In the 2017 PGA Tour season, Anirban took the joint runner-up spot at The Memorial Tournament presented by Nationwide. He was also tied third at the CIMB Classic (co-sanctioned by the PGA & Asian Tours). His third top-10 was tied ninth place at the BMW Championship. As a result Lahiri finished a career-best 51st in the FedExCup Rankings and earned an exemption for the following season.

•    In 2016, Anirban Lahiri represented India at the Rio Olympics. He was part of the two-man Indian team at Rio along with SSP Chawrasia. The same year he also represented Team Asia for the second time at the EurAsia Cup.

•    The year 2016 saw Lahiri secure tied second place at the Hero Indian Open (co-sanctioned by the European & Asian Tours). He also claimed the runner-up spot at the Venetian Macau Open.

•    Lahiri’s best result on the PGA Tour in 2016 was tied sixth at the Dean & Deluca Invitational. He also posted another top-25 on the tour and thus earned exemption for the 2017 PGA Tour season.

•    Anirban became the first Indian to play at the Presidents Cup in 2015 in Incheon, South Korea. The Internationals lost by one point to the US.

•    Anirban’s wins at the CIMB Niaga Indonesian Masters and the Venetian Macau Open along with seven other top-10s propelled him to second place on the Asian Tour Order of Merit in 2014. He also won the PGTI Ahmedabad Masters the same year. He earned his playing rights on the European Tour for 2015 with a top-20 finish at the Qualifying School.

•    He was part of the inaugural EurAsia Cup in 2014 in Malaysia where he helped Team Asia secure a dramatic 10-10 tie with Team Europe after suffering a 0-5 defeat on the first day.

•    Represented India (along with Gaganjeet Bhullar) at the World Cup of Golf 2013 in Melbourne.

•    Anirban won the SAIL-SBI Open 2013, was joint runner-up at the Hero Indian Open and had six other top-10s on the Asian Tour the same year. He finished third in the Asian Tour merit list. In 2013, Lahiri also won three events on the PGTI including the McLeod Russel Tour Championship.

•    Anirban Lahiri won the SAIL-SBI Open 2012 and posted four other top-10s during the season to secure 10th place in the Asian Tour money list. Lahiri made a memorable debut Major appearance when he claimed tied 31st place at the British Open 2012.

•    Anirban won the PGTI Players Championships at the Tollygunge Club and the Panchkula Golf Club in 2011. He was also the joint runner-up at the BILT Open. He finished fifth in the 2011 Rolex Rankings.

•    Lahiri’s best results on the Asian Tour in 2010 were tied fourth at the Johnnie Walker Cambodian Open and tied eighth finishes at the Worldwide Holdings Selangor Masters and the Handa Singapore Classic.

•    In the 2010 PGTI season, Lahiri won the PGTI Players Championship presented by Aamby Valley Golf Course, the PGTI Players Championship presented by Oxford Golf & Country Club and the BILT Open. He also posted three other top-10s. His 24-under-264 total at Aamby Valley helped him set a new PGTI record for four rounds. He ended the year in third position on the Rolex Rankings.

•    Anirban was the 2009 Rolex Rankings champion with two wins and seven other top-10 finishes in the season. He won his first professional title at the Haryana Open 2009 presented by HUDA and DLF and followed that up with victory at the BILT Open 2009. His other top performances of the season were a runner-up finish at the DLF Masters 2009 and third position at The Global Green Bangalore Open 2009. He wrapped up the year with total earnings of Rs. 36,57,853.

•    He registered five top-10s in his first season (2009) as a full card holder on the Asian Tour. He was tied third at the Indian Open and fourth at the Black Mountain Masters. He finished 24th on the Asian Tour Order of Merit in 2009.

•    He was very consistent in the 2007-08 PGTI season which also happened to be his first season as a professional. In 2007-08 he posted five top-10 finishes out of 13 starts to secure eighth place on the Order of Merit. His best results were tied runner-up finishes at the PGTI Players Championship at RCGC and the BILT Open 2008. He did not miss the cut even once.

•    Was part of the Indian team that bagged the silver medal at the 2006 Doha Asian Games.