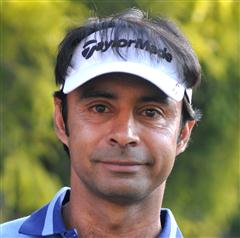 •    Randhawa came up with two top-6 finishes on the PGTI in 2016 with his best of tied third coming at the TAKE Open Golf Championship.

•    He had two top-10s during the 2015 Asian Tour season. His best performance was tied fourth at the Panasonic Open India.

•    Jyoti claimed seven top-20s including three top-10s during the 2014 Asian Tour season. His best finish was tied second at the Chiangmai Golf Classic.

•    In 2013, Randhawa clinched two top-5s on the Asian Tour which included a tied second at the CJ Invitational and fifth place at the Indonesia Open.

•    Jyoti won the PGTI Players Championship at Noida Golf Course in 2012 and in the same season lost out in a playoff to Ajeetesh Sandhu at the DLF Masters to finish runner-up.

•    Randhawa posted five top-20s on the Asian Tour in 2011. His best result was tied fifth at the Panasonic Open (India).

•    In 2010, he was third at the SAIL Open and tied 10th at the Johnnie Walker Championship at Gleneagles.

•    Randhawa won the Singha Thailand Open 2009. He was also joint runner-up at the Maybank Malaysian Open in the same season.

•    Jyoti came up with some impressive performances at the international level in 2008. His best results came at the SAIL Open (Asian Tour) and the BMW PGA Championship (European Tour) where he finished tied second and fifth respectively.

•    In 2007 he made a record of sorts by registering his third win at the Asian Tour’s Hero Honda Indian Open.

•    Jyoti ended a two-year winless run by lifting a second Hero Honda Indian Open crown in a play-off in 2006. He beat compatriots SSP Chawrasia and Vijay Kumar in this play-off.

•    He retained his European Tour card after a solid rookie season in 2006 where he finished 68th on the Order of Merit with three top-10s.

•    Represented Asia against Europe at the Royal Trophy in 2006.

•    Randhawa enjoyed a lucrative season in 2005 as he finished third on the Asian Tour Order of Merit. He ended his season with a second place finish in the Volvo Masters of Asia in Bangkok. He posted another runner-up finish at the 2005 Malaysian Open.

•    In 2005 he also earned his European Tour card with strong performances at the Dubai Desert Classic and Qatar Masters following top-15 finishes.

•    Partnering Arjun Atwal he helped India finish a creditable ninth at the 2005 World Cup of Golf in Portugal. This has been India’s best performance at the World Cup so far.

•    He finished the year 2004 with a bang by winning the Volvo Masters of Asia in Kuala Lumpur. Beat Terry Pilkadaris of Australia in the second hole of a sudden-death play-off and the win propelled him to second place on the Asian Tour Order of Merit.

•    Randhawa finished tied 27th at the 2004 British Open at Royal Troon. This still stands as the record for the best result by an Indian at the British Open.

•    In 2003, he broke through in Japan, winning the Suntory Open. It was the first win by an Indian in Japan.

•    In 2002 Jyoti became the first Indian to win the Order of Merit title in Asia after making a brave comeback from injury. The Indian broke his collarbone following a motorcycle accident in March and was out of action until August but returned to the Tour stronger than ever. He did not win that year but finished in the top-15 in 10 events. His superb season earned him the praise of his peers who voted him the Asian Tour Players’ Player of the Year.

•    Represented India at the Alfred Dunhill Cup in 1999. The other members of the Indian team were Jeev Milkha Singh and Vijay Kumar.

•    Represented India at the 1994 Hiroshima Asian Games and at the Eisenhower Trophy in 1992. He won the All India Amateur Championship in 1993.

•    Jyoti is an experienced skydiver and a skillful shooter.