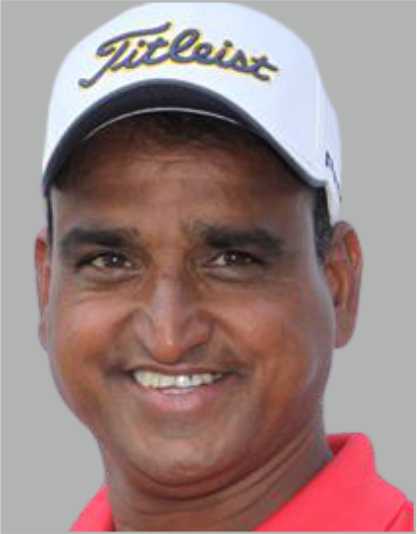 •    Mukesh Kumar ‘King of the Indian Greens’ has over 100 titles to his name on the Indian domestic circuit as well as one international win.

•    Mukesh won the TATA Steel PGTI Players Championship 2019 Presented by Panchkula Golf Club to break his own record of being the oldest winner on the PGTI. Mukesh achieved the feat at age 53. He secured four more top-10s during the season including tied second finishes at the PGTI Players Championship at Classic Golf & Country Club and IndianOil Servo Masters. Mukesh took eighth place on the PGTI Order of Merit 2019.

•    Mukesh delivered nine top-10s on the PGTI in 2018 to garner 12th place on the PGTI Order of Merit. His best results were tied second at Chennai Open and second place at Kensville Open.

•    In 2017, Mukesh won the PGTI Cochin Masters presented by CIAL Golf Club and posted five more top-10s including third place finishes at the Golconda Masters and TAKE Classic. He took seventh place on the PGTI Order of Merit 2017.

•    Mukesh Kumar won the Asian Tour’s Panasonic Open India 2016 to register his first ever international victory. In the process, he became the oldest player to win on the Asian Tour at age 51.

•    He finished 10th in the PGTI’s 2016 Rolex Ranking. In the 2016 PGTI season, he won the Express Exclusive presents Chennai Open Golf Championship and also registered six other top-10s.

•    Mukesh finished second in the 2015 Rolex Ranking thanks to wins at the PGTI Cochin Masters and the 14th TATA Open as well as three other runner-up finishes.

•    Kumar was fifth in the 2014 Rolex Ranking having posted ten top-10s in the season including a runner-up finish at the Chief Minister’s Meghalaya Open.

•    He won the PGTI Players Championship at Chandigarh and secured seven other top-10s including two runner-up finishes to end up in fifth position on the 2013 Rolex Rankings.

•    He was fifth on the 2012 Rolex Rankings with two wins (IndianOil XtraPremium Masters and PGTI Players Championship at Poona Club) and 13 other top-10s.

•    Mukesh posted 11 top-10s in 2011 PGTI season to be ranked third on the Rolex Rankings. His best results in the year were runner-up finishes at the PGTI Players Championship events at Jaipur and Panchkula and at The Global Green Bangalore Open. He also bagged a tied 14th place at the Panasonic Open (India) on the Asian Tour.

•    Mukesh has the distinction of carding the lowest score in a single round in India. He achieved this feat with a round of 11-under 59 at the DDA Open in 2005. His overall score of 30-under is also one of the best achieved on Indian soil.